Maritime law requires that mariners help fellow mariners in distress to the best of their ability. Since seafaring began It has always been a custom unquestioned by those who hold the sea close to them.
Mariners of the Tofino area responded to the best of their ability to the recent marine emergency in their coastal backyard as only they could. With the exceptional sea leg skill of people intimate with the sea and knowledge of the neighbourhood, they saved their fellow human beings in distress. Their natural seafarer reaction was reminiscent of how the people of Hartley Bay responded when the Queen of the North sank in their environmental wheelhouse on the BC coast in the middle of the night during the winter of 2006. In Vancouver’s English Bay, the same afternoon seafarers of Tofino answered their calling and came to the rescue, the BC coastal community of the Jericho Sailing Centre also exercised the bond of the sea to save a sailor’s life. 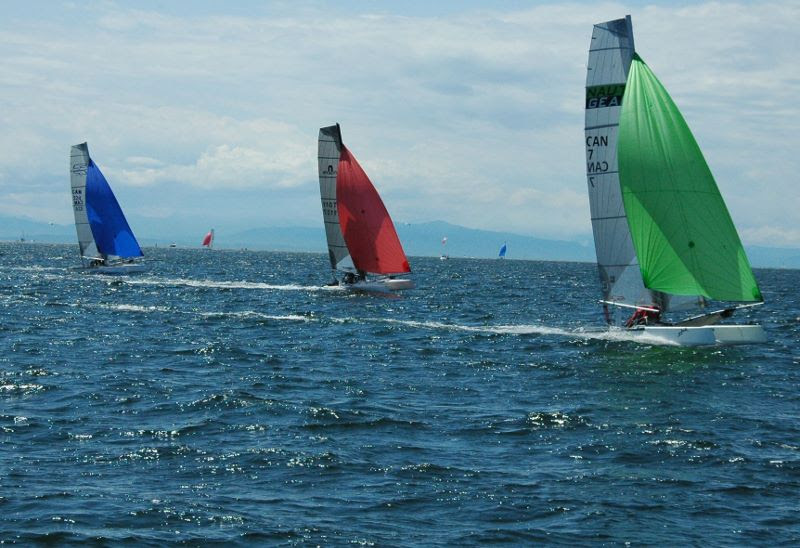 On October 25, 2015 the Jericho F 18 Fleet raced their high performance, double handed catamarans in a stiff Pacific autumn breeze at the last Penguin Cup Racing Series race of the year. After a high speed, spinnaker flying reach, one of the cats capsized while gybing at the leeward mark; the skipper was knocked unconscious, likely by the boom, and both he and the crew were thrown into the water. When the crew surfaced he tried to locate the skipper with no success. He swam to the capsized vessel and climbed on for a better view. He spotted his skipper floating motionless, face down in the water, 40 metres away. Swimming over as fast as one can swim in full sailing gear, he pulled his unconscious skipper`s head out of the water and slapped his face, which brought him to a sea water sputtering, coughing, semi-conscious state. 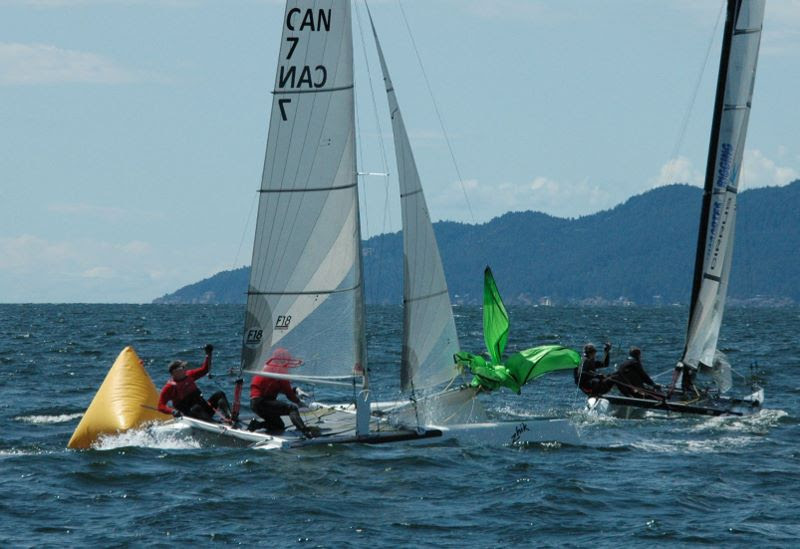 Their capsizing competitor and subsequent crew swim had not gone unnoticed by the F-18 crew trailing them in the race. They recognized, as they were closing in, that there was an emergency situation, sailed over and assisted the crewmember in getting the stricken skipper onboard the trampoline of his now overturned craft.
Meanwhile, the Jericho Marks boat, crewed by 2 volunteer members of the Jericho Rescue Team, had been preparing for a race mark adjustment once all the boats had rounded the leeward mark. They were in a good position to observe the F-18 go over and notice the following boat deviating from normal race course behaviour. They recognized the emergency situation and were on scene very quickly.
The Jericho Rescue crew member worked with the F18 sailors to get the stricken sailor from the overturned F18 onboard the rescue boat while the helmsman of the Jericho Marks contacted Jericho Base on marine radio to activate Emergency Medical Services. Fire and ambulance crews arrived at the Jericho Sailing Centre shortly after Jericho Marks made shore and the sailor was transferred to VGH. The skipper, who has limited memory between the tipping point of a blown gybe and waking up in the hospital, spent two days there being treated for sea water in his lungs and a blow to the head. The timely first responder efforts of his F 18 fleet mates and the volunteers of the Jericho Rescue Team ensured he lives to sail another day.
The JSCA would like to recognize the rescue efforts of F 18 sailors Kevin French, Colin MacDonald and David Fearn, as well as Jericho Rescue Team members Paul Botkin and Lou Parsons in Jericho Marks, and Andrei Bredin and Josh Grigg on shore as well as PRO Mike Wang and the members of Jericho’s F18 fleet who stood by during and after the event. On behalf of Vancouver’s ocean community – thank you all.