In the winter of 1894 a powerful Pacific storm bearing westerly winds merged with a massive  Salish Sea King tide and produced a devastating, wave scouring, flood that wiped out a local pioneer of Vancouver recreation on this site, the Jericho Golf & Country Club. In less time than it would take to play a round of golf, 18 holes were vigorously washed down nature’s drain. 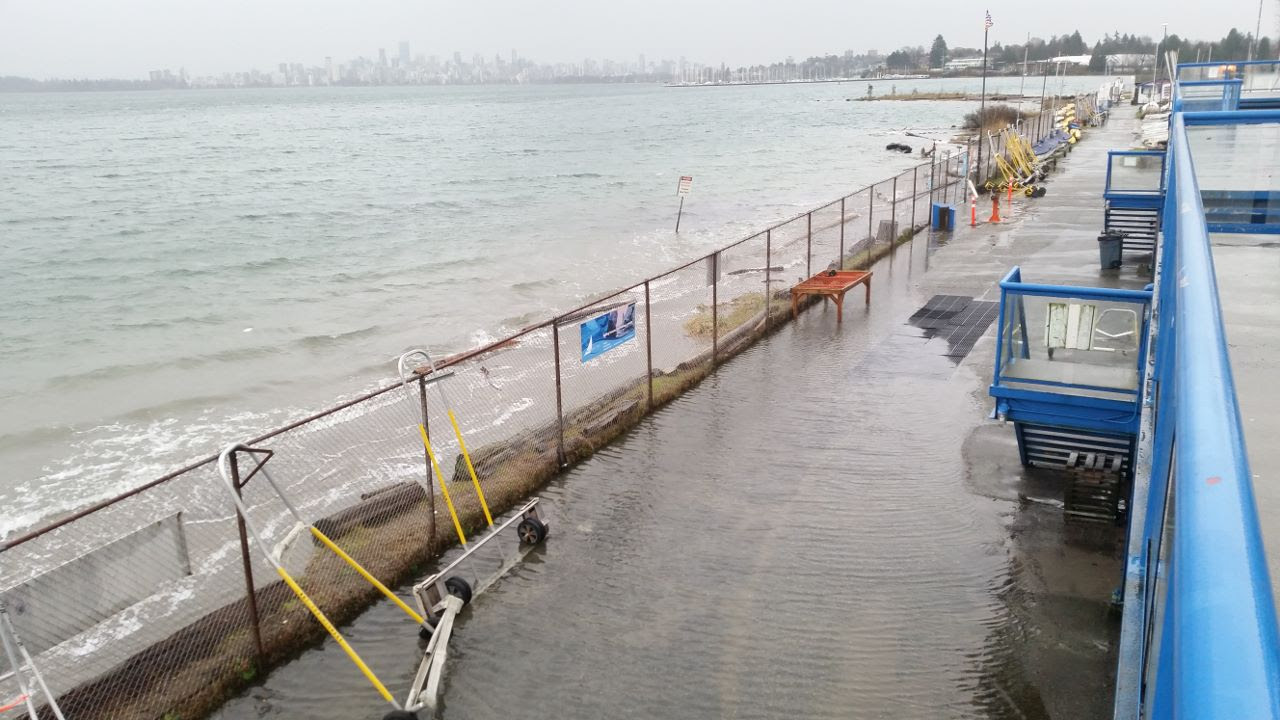 More recently we’ve become increasingly aware of King Tides, the highest of annual tides, caused by the closest proximity of the earth to the sun which occurs during this time of year. A Pacific Ocean storm surge can cause local water levels to rise as much as 2 feet,  not normally a problem, until you pair it with the ripest of King Tides. It is reasonably rare that the peak period of a King Tide perfectly aligns with the required duration and intensity sweet spot of a Pacific storm, but over the past few years it seems to have happened with more flood-forming frequency. 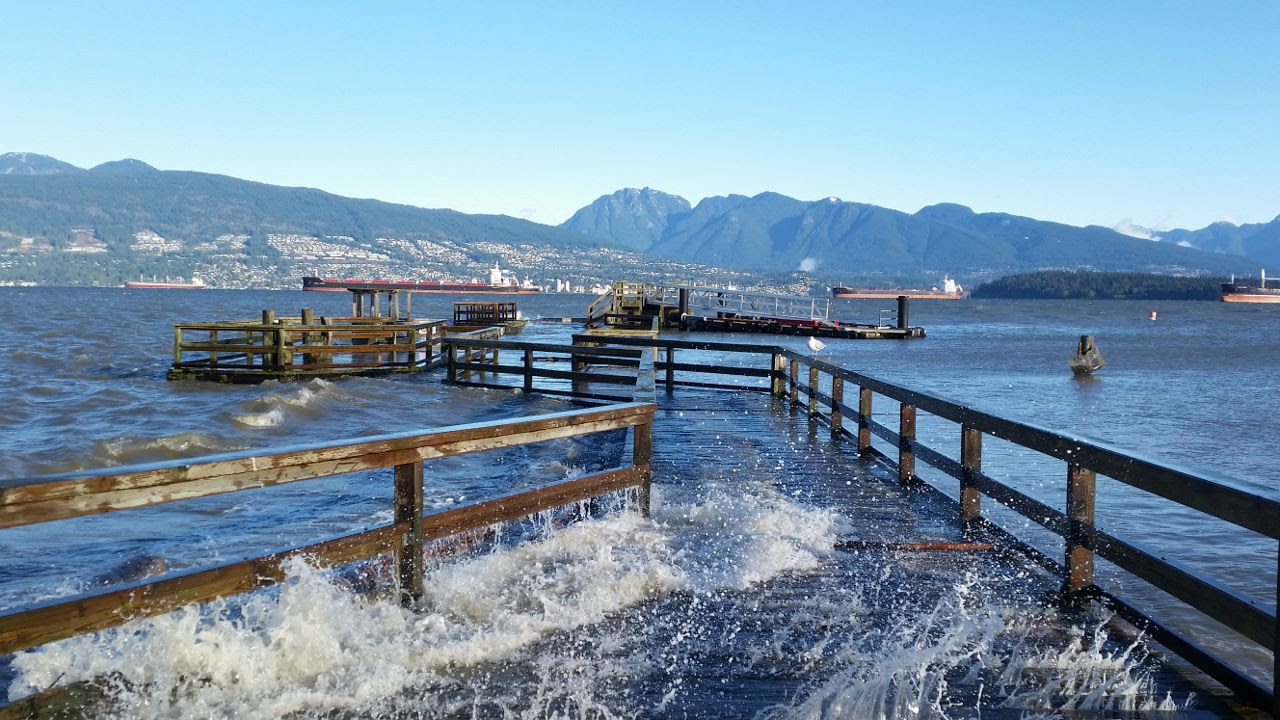 The latest benchmark December 2012 King Tide & westerly Pacific storm combo teamed up with a broken log boom to batter and splinter the Jericho Pier leaving it severely bruised, beaten and unusable for 6 months-suddenly people began to take notice. King is a thing, and maybe there is something to this climate change, rising sea levels, “other thing”.
On November 28, 2014 a less Kingly tide (15.6ft) united in anger with a strong westerly wind, again transporting surf logs, Trident’s favourite battering rams, into the hapless Jericho Pier. This time the damage was not as serious and although it had to be closed for deck repairs it was reopened within in a few days, much to the enjoyment of Vancouver ocean lovers. For a brief spell, during the climax of last November’s surge, the north fringe of the Jericho Sailing Centre became one with the sea. (See photos). 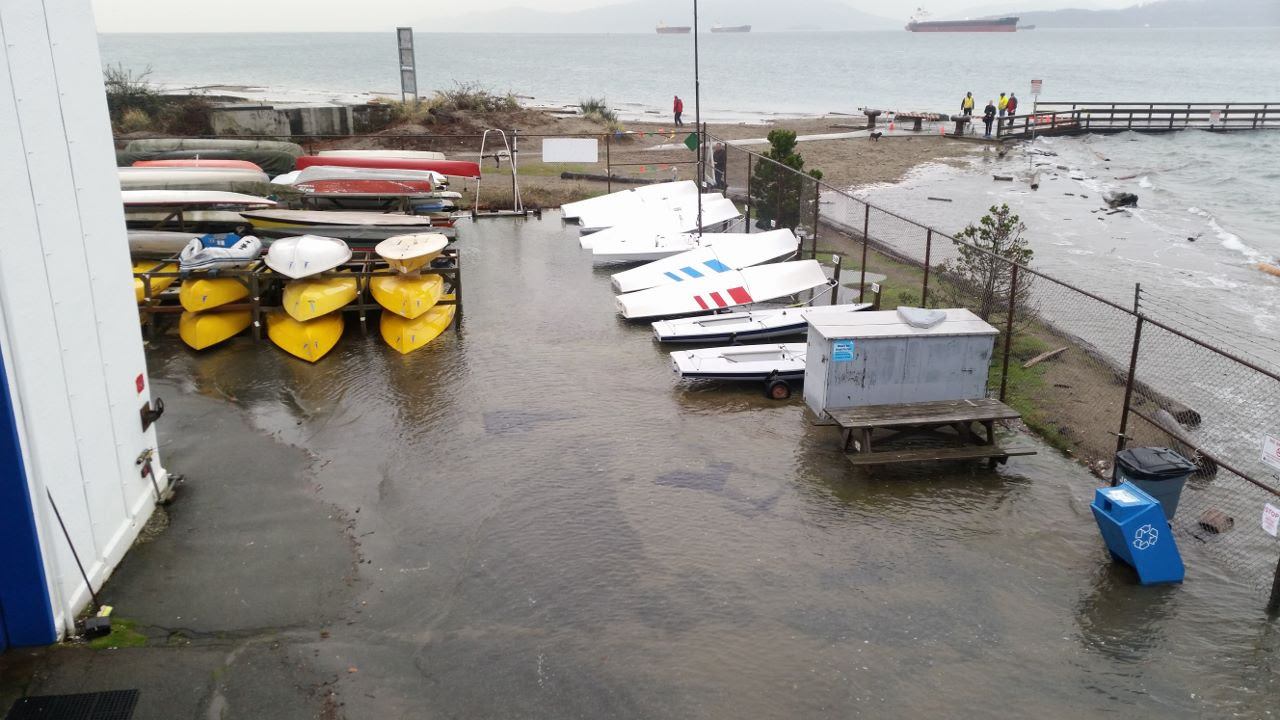 In early December, 2014, King Tides combined with 2 powerful storms on consecutive days hitting the Lower Mainland with SE winds and an ocean of rain (an ingredient not normally included in westerly winds). The effects were destructive in Boundary Bay; the landing zone for waves driven across the full fetch of the Puget Sound. At Jericho, as with any southerly/easterly wind, the sea surface was relatively benign, but it did quietly creep within the north fence of the Jericho Sailing Centre for a short visit and filled the very NW corner of the compound, floating some Viking Sailing
Club boats 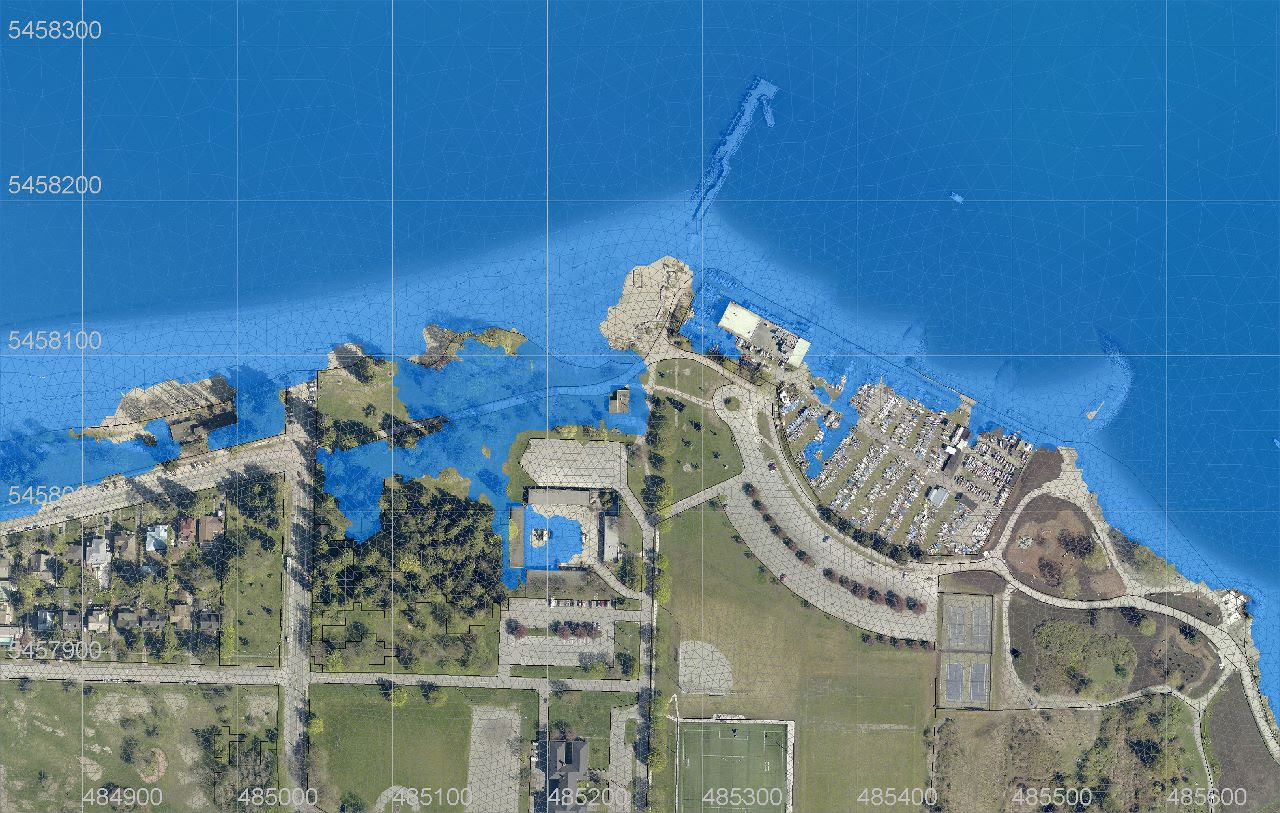 Ocean levels worldwide are rising, so climate change and flooding in the area of Jericho, Locarno and Spanish bank has been on the City of Vancouver’s radar for a while now: thousands of sandbags placed in the area this week is evidence they are well aware and ready to take action. The Jericho flood model shown above is an extreme example, significantly beyond the land mark flood of December 2012 or anything we’ve seen in the last quarter century, but it is something that is being considered in the planning to help keep our heads above the water in the future. As an oceanic educational facility we can easily recognize and appreciate that heeding a lesson from our maritime past can help us avoid repeating the historic Jericho recreational facility experience of, sinking like a putt