Over the past two weeks we’ve informed “in the wind” readers about Jericho Rescue Team member, Theresa Riedl’s, once in a lifetime voyage from Honolulu to Vancouver on the 58′ sailing yacht “Maiden”.

“Maiden” made history in 1989/1990 as the first all-female crewed vessel in the Whitbread Round the World yacht race. “Maiden” is now on another round the world campaign, this time to raise awareness for women in sailing, women’s education, and women’s empowerment. The yacht is crewed by some of the top female sailors in the world plus 3 or 4 “mile builders” (females with a passion for sailing who show they can benefit from this experience) such as Theresa. As “Maiden” approaches Vancouver (expected  to arrive mid-day this Saturday) Theresa shared her thoughts in the following blog: 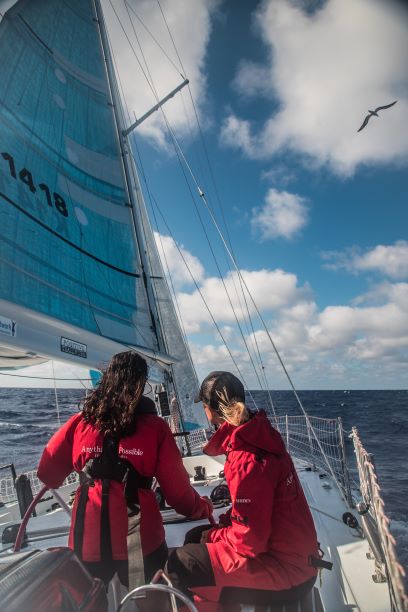 I write this blog entry on the evening of a beautiful day of spinnaker sailing. I can see land on the chart plotter at the nav station, and it’s not any land but the land I call home. Although the thought of sailing into Vancouver makes me very excited as I will have completed my first ocean crossing and am really looking forward to seeing my friends and family, it also means that this incredible journey is coming to an end.

Before I left people asked me if they think I’ll get tired of being out at sea for so long, if I’ll get sick of seeing nothing but blue for weeks, and if I’m scared of being out there in the middle of the ocean. The truth is I was scared before I left. The day before leaving I woke up in a panic of “oh my god, what am I doing, I am crazy” and thoughts of “what if something happens out there” went through my mind. But that’s the thing about chasing your dreams, you will feel really scared at times, but you got to push beyond the fear, that’s where the real magic happens.

For the answer of whether I am sick of being at sea? The answer is a big fat no! In fact, I’ve grown to love the ocean even more (which may be hard to believe for the people who know me). As I flew into Hawaii on the six hour flight over the Pacific I stared down at the ocean I will soon be sailing across and thought, “holy sh**t it’s really big”! But the funny thing is when you’re actually down there sailing across it, it doesn’t seem so big and scary (at least I think so). It’s quite the opposite actually. Being out here for days on end, seeing no land at all is really incredibly beautiful! I also feel like I’ve gotten to know the ocean better than ever. All of its moods, from angry stormy swells, to beautiful blue sky downwind spinnaker sailing, to early morning fog with an ocean as flat as a lake; Its power is its beauty.

Of course, I am looking forward to certain aspects of being back on land such as sleeping in a bed that’s not tilted on an angle so hard that you may fall out because the boat is heeled over so much. Or going to the toilet without needing to hang onto the walls otherwise you may be thrown head first into the wall, again because of the boats heel. But you adapt to all that stuff. What I will miss is everything else though. The sunset sails, the team dinners, the marine wildlife that has greeted us throughout, night sails under starry skies, and just being out here in the big blue with these amazing women sailors who are all so passionate and knowledgeable.

To anyone whose got a dream (especially the young girls out there), keep on chasing it even if it seems farfetched. There will be times when it feels impossible, but keep pushing, learning, applying to things, networking, and things will happen!

“Be fearless in the pursuit of what sets your soul on fire”.

Very excited to see you so soon Vancouver! 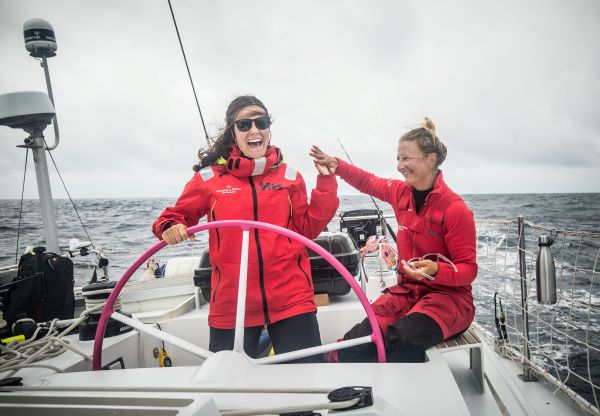 Check out the Maiden movie trailer: