The bells that now toll here are wind whipped stainless halyards ringing a forest of anodized aluminum sailing dinghy masts; but it wasn’t always that way.
Department of National Defence Building 13, now known as the Jericho Sailing Centre, was a hustling, bustling place during the Second World War. Here, Canadians carried out their solemn duty to serve our country, to stand with honour to defend and preserve the freedom and way of life we cherish today. 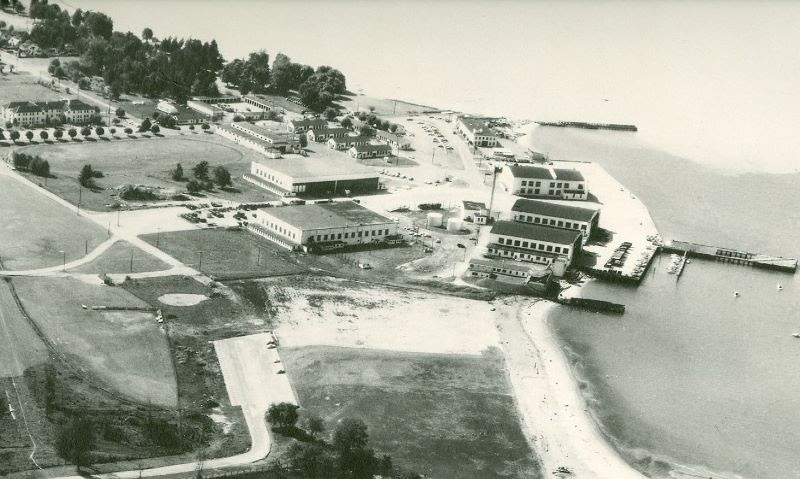 What is now known as Jericho Beach Park and the adjacent lands south of 4th Avenue were all part of the largest military training base in western Canada, Canadian Forces Base Jericho Beach. The foreshore, which was hemmed with an apron of concrete wharves including 4 large airplane hangers and a Marine & Stores building (now the Jericho Sailing Centre), was RCAF Jericho Beach Air Station, a flying boat and seaplane base. Through the CFB Jericho Beach passed thousands of western Canadians in their metamorphic journey from civilians to soldiers, launched from here to the eternal hell that is war. Many never came home.

The crews and personnel of Royal Canadian Air Force Squadron 4, launched flying boats and seaplanes; craft with names like: Blackburn Shark, Fairchild 71, Vickers MKII, Canso Catalina and the mainstay of the fleet, the Supermarine Stranraer – a sub hunter-nicknamed “the Whistling Birdcage” for the sound generated by it’s biplane wing shrouds and rigging in flight.
The wind and the sea were elements as important to those brave souls as they are to us today although their work was far more dangerous than our leisure time launches. A dead calm sea was difficult to take off from as the heavy craft’s hulls had to break through the salt laden surface tension to lift off. A sleeping sea was also treacherous to land on as it was impossible for sky skippers to judge altitude over a swiftly rising glassy surface. Larger waves could also be a problem. There were many spills; eleven aircrew lost in mishaps during this period. In one episode a Blackburn Shark’s pontoons punched head on into an English Bay rogue wave in the late stages of a takeoff, flipping the bird and killing the crew.
It may soothe the pacifist nature of our modern day users to know that in over 1700 wartime sorties the original crews of Jericho never fired a shot in anger and their only contact with the “other side” was a mysterious, ineffective, invasion of bomb rigged weather-type balloons in the winter of 1944/45.